One of the things that is nice about living in an old(er) house: it gives you projects...

It's important to me to feel needed, serve some useful function, and have a reason to get up each morning - a reason to live. I own an older house, and I am of the 'handyman' persuasion, so this isn't a problem.

Our older house has an addition that was built over a crawl space using a wood post foundation. This spring we noticed a small crack in drywall that looked like it might be caused by the settling of a corner post. (I had previously replaced the center post, that had started to degrade, before adding a deck because it would be hard to replace later.) 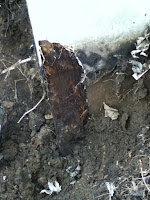 I called diggers hot line, got out my shovel and wheel barrow and dug in. As soon as I pulled away the top layer of dirt I could see how much of the outer part of the post had been worn off by decay. It seemed like only a 4 X 4 left holding up that whole corner - if that.

It took me three days of digging to get down to the concrete footing. I worked slowly to save my back. The ground was plenty wet and if it wasn't for all the stone in the mix they used for back fill, it would have been easy digging. As it was it took a lot of patience and shovel wiggling. 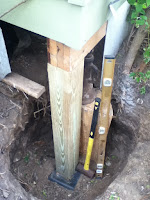 Soon the hole was large enough to fit a sister post with a house jack. A couple turns on the jack and the weight was off the post and it was easily removed. Half a turn more to make clearance for the new post and then a "pop". Debi came running out of the house. "What are you doing!" She exclaimed; "The house sounded like it was breaking." Not to worry, I assured her, it's just un-settling a bit.

The new post was carefully cut and wiggled into it's spot (I added a rubber piece between the concrete footing and the post to prevent any water wicking in from the concrete. ) A couple back turns on the jack and everything is solid and tight once more. 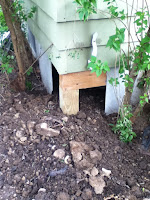 It took far less time to back fill the dirt. I had some left over but this will be added as things settle in. I'll wait till then to replace the skirting.

During these projects my wife keeps saying things like; "Are you sure you know what you're doing?" And; "We could hire someone to do that." But maybe she doesn't understand how important it is for me to have these projects.  Yes we could hire someone to do it faster but what I lack in speed I make up for in quality and attention to detail. (insert rant on lack of quality workmanship now-a-days.)

I'm an old(er) guy with an old(er) house and this arrangement works out fine for both me and the house. For thirty years I had a career in Technical Support. Feeling needed wasn't a problem then and - since I retired - this old(er) house helps it not be a problem now.

Posted by Jack Pynesapp at 7:23 AM No comments: Links to this post

Links appearing in this blog.